A Bead with a Prupose

Mythology can be both fascinating and intriguing. The Rudraksha beads have garnered attention and have piqued the interest of many. These brown, wooden beads are more than that meets the eye. Originating from the Hindu mythology, Rudraksha also has an interesting story behind it. It is believed that, as an act of benevolence, Lord Shiva meditated for years to bestow love, happiness and prosperity on all mankind. Upon opening his eyes, Lord Shiva witnessed the unrighteous conduct of the demon Tarkasur’s sons and shed tears of grief.
These tears crystallised to take the form of Rudraksha seeds which grew to be Rudraksha trees. Our ancient Hindu texts and scriptures have recorded the significance of these seeds rather well. These trees are found in selected regions of South-East Asia and South Asia. Mostly found in the hilly mountain regions of Nepal, India, Indonesia, Myanmar and Sumatra. The fruit of this tree is known as the Rudraksha bead which is brown in colour and sour in taste.

The Rudraksha bead has been worn by human beings for centuries. This piously divine bead has such inherent quality that enables one to be free of sin and lead a life filled with peace and prosperity. These seeds are believed to possess powerful electromagnetic properties which have proven to be effective in controlling stress levels, blood pressure, and hypertension. Not only this, rudraksha beads induce a placid disposition in the wearer, improves concentration and mental health. It enables one to transform one’s outlook on his/her life.
Since ages, Rudraksha has found many takers in people from Eastern cultures such as Chinese, Buddhist, Japanese, Korean and Indian. But its popularity took a turn for the better in the late 80’s after many researches proved its positive effect on the human body, mind and soul. No wonder, these are beads with a purpose. Sages, who lead a nomadic yet powerful life in the Himalayas, have attained spiritual knowledge with the help of Rudraksha. These beads when coupled with the right Mantras can work miracles in the lives of people who wear them. 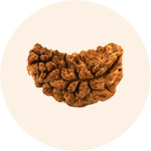 It symbolizes Godhood, supreme truth and realization of infinity. The One Mukhi Rudraksha bead is Lord Shiva himself and it is chief among all Rudraksha of all mukhs. It is ruled by the Sun and enlightens the super consciousness. It helps the wearer to channelize his energy towards a specific goal, thereby helping him attain it with ferocious vitality. 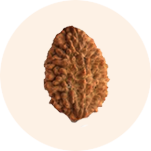 This Rudraksha effectively controls the malefic effects of Moon, both at the physical and spiritual level. The Two Mukhi Rudraksha has the natural two lines or mukhs. This oval shaped Rudraksha has Moon as its ruling planet. The Two Mukhi Rudraksha is the symbol of Ardha Nareeshwara, which is the the joint image of Lord Shiva and Goddess Parvati (Shakti). It brings speech, meaning and unity in the wearer’s family, thereby ensuring him a harmonious life. 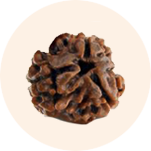 The Three Mukhi Rudraksha bead is known to one of the most powerful Rudrakshas. It enables the wearer to get rid of the problems, be it of his past, present or future. This bead, when combined with the appropriate Mantras, dramatically evolves a person’s life for the better. It is highly sanctifying and removes all the sins by sight, contact and japas.

Cure of Diseases: Protects from Arms and Weapons, Ward off ill luck and purifies blood 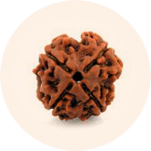 This Rudraksha is blessed with the power of Brahma. Being influenced by the creative wisdom of the four headed Lord Brahma, it enhances the wearer’s creative mastery and provides him with learning and knowledge. It is highly beneficial for students, scientists, researchers, intellectuals, artists,writers and journalists. 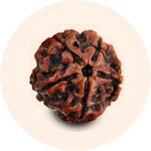 The Five Mukhi Rudraksha is the form of Rudra named Kaalgani. It helps the wearer to not only attain spiritual balance and enlightenment in life but also blesses him with good health and longevity of life. The wearer gets rid of the fear of death and lives a blessed and fulfilling life.

Cure of Diseases: Sublimates the malefic effects of Jupiter such as Lack of peace, poverty, harmony and diseases pertaining to Lungs, heart and blood 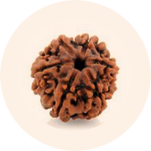 The Six Mukhi Rudraksha is the centre of power of Lord Shiva’s second son, Kumar Kartikeya. It blesses the wearer with a powerful insight and immense spiritual knowledge, thus, protecting him from worldly sorrows and calamities. 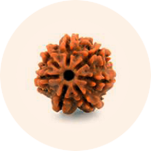 The Seven Mukhi Rudraksha sublimates the malefic effects of Shani and protects the wearer from diseases and untimely death. It enables him to lead a life filled with prosperity and success. 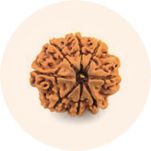 The Eight Mukhi Rudraksha is the second form of reflection of the first son of Lord Ganesha. Its wearer remains unaffected by desolation, physical, divine or mental forces. It sets the wearer free from the sins incurred by telling a lie and lets him attain all the Riddhies and Siddhies. 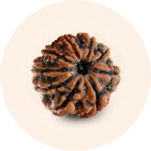 The Nine Mukhi Rudraksha is the form of Goddess Durga (Shakti). It holds the power of the nine deities. This Rudraksha blesses the wearer with vitality, bravery and fame. By wearing this Rudraksha, the person receives blessings from Durga Shakti-the Supreme Mother. The wearer’s devotion in God also increases. 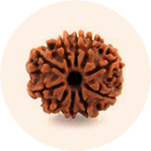 Lord Narayana (the Preserver) is the deity representing the ten Mukhi Rudraksha. It enables the wearer to overcome turbulent times and ensures that he and his family is protected from all the evils. It shields one from anguish and misery. 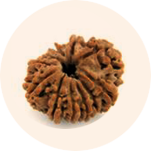 For all the devotees of Lord Shiva, this one is the most effective Rudraksha. The Eleven Mukhi Rudraksha bead is regarded as the light mass of Lord Rudra Shiva. There are eleven Rudras and the eleventh Rudra is Lord Hanuman. With the blessings of Lord Hanuman, the wearer is freed from all the negativity and evils surrounding him. 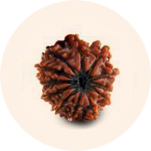 The 12 Mukhi Rudraksha is the center of radiance, gleam, happiness and strength of 12 forms of the Sun God (Surya). The wearer moves continuously with brilliant radiance and strength. It blesses him with wealth and abundance opening a life full of miracles in front of him.

Cure of Diseases: It protects from all kinds of weapons or any danger from fire or disease or sickness 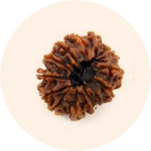 Believed to be bestowed by all the riches and success, the wearer of the 13 Mukhi Rudraksha leads a life full of abundance and prosperity. This Rudraksha is the form of Lord Indra who blesses the person donning it. 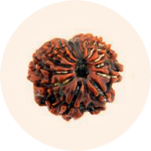 A Rudraksha with fourteen faces is the zenith of Lord Shiva. It shall be worn on the head with great devotion. The man who adorns himself with this bead becomes the epitome of the Lord himself and is regarded highly by his fellows.

Cure of Diseases: Removes all obstacles from life and guards from diseases